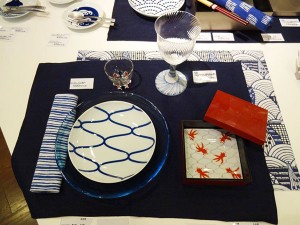 Japanese ceramics are decorated with a large variety of patterns. While these include everything from floral and plant motifs, images of fish or dragons, to contemporary geometric patterns, all such patterns have a meaning. The Japanese people were good at incorporating these meanings into their lives in the wish for longevity, the health of their children, or other festive things.

For example, mesh patterns are said to sift out bad things or prevent us from catching the plague(!) and often appear on rice bowls and small dinner plates. Snowflakes became hugely fashionable as patterns appearing on kimono and ceramics during the latter half of the Edo period when microscopes were introduced to Japan from the West, and snow crystals came to be researched. These snowflake patterns became established as auspicious patterns due to their association with the bumper rice harvests that are produced in years with heavy show, which produces a plentiful supply of water. Then we have dragon and fish scale patterns, which are symbols of success in life. Meanwhile, the twin fish design is a Chinese-inspired design symbolizing the accumulation of wealth.

Understanding these patterns gives us an added dimension of pleasure when we sit around the dining table and notice the pottery plates and bowls and the patterns that appear on them. And perhaps talking about the meaning of these patterns might make conversation that one bit more lively as you enjoy your meal together. Behind every pattern lies a background story, no matter whether the pattern originated in China, was inherited from the Heian period, or was used ever so stylishly by Edo townsfolk. The background stories embedded in these patterns offer us a glimpse into the way of life that was led in each of these periods. This being the case, I wonder what kind of pattern would be suitable for the present age?