The character of Seto, the historical capital of ceramics 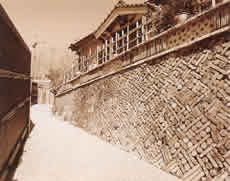 Owari Seto, the terminus of Nagoya’s Meitetsu Seto Line, is the hometown of Seto ware. Seto ware is known as seto-mono in Japanese, a word that is also used to refer to pottery items in general. The city of Seto runs like a belt along the Setogawa River. The hilly areas on the northern side of the river are covered in clay quarries. A hill-top viewing platform offers views over a basin-shaped open-pit mine, some 50 to 100 meters deep. The stark, expansive landscape, which is rather unusual for Japan, is resonant with the historical character of Seto, an area that has long served as the capital of ceramics. 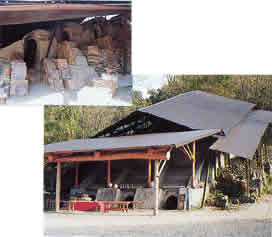 Seto ware has its roots in the Heian period (794–1185) and is said to have originated when the potters of Sanageyama, working in the south-eastern areas of Seto, started to fire their wares using ash glaze. It was the potter Kato Shirozaemon Kagemasa who made the word seto-yaki (Seto ware) famous. In fact, he is still referred to affectionately by the people of Seto as Toshiro. After six years of study in Song dynasty China, where he mastered the art of ceramics, Toshiro returned to Japan and established a kiln in Seto. He was the founder of Ko-Seto ware (old Seto ware), the first kind of pottery in Japan to use a true glaze. With this, Seto ware came to be known all over Japan. However, with the rapid growth of porcelain production in Arita during the early Edo period (1603–1868), Seto ware threatened to fall into decline. It was a potter called Takamichi Kato who saved the day. He made a solo journey to Arita, where he mastered the porcelain production process. Three years later, he returned to Seto with the technique. The Seto ceramics industry revived, producing large quantities of its original earthenware products in addition to sometsuke (underglaze blue) pieces.

Seto produces a diverse range of ceramic items, including Western-style tableware. In particular, the tiles that create urban beauty and the ceramic ornaments that started to be produced during the Taisho period (1912–1926) have attracted attention on a global scale. It appears that the high quality soil in Seto was just right for these kinds of highly aesthetic designs. In recent years, with advances in fine ceramics, Seto ware has also moved into the field of musical instruments, earning itself high praise from figures in the music world.

The ceramics technique that Toshiro brought back with him from China involved creating a compound of ground limonite and wood ash to create the glaze. Later, during the Azuchi–Momoyama period (1574–1600), elegant tea bowls created in different styles such as Oribe-guro, Seto, Shino, Oribe, and Ki-Seto came into being thanks to tea masters such as Sen no Riyu, Furuta Oribe, and Kobori Enshu. Nowadays, many traditional and classic pieces, such as the tea caddies and water containers used in the tea ceremony, are still produced in the Ko-Seto style, with a dark reddish brown glaze.

↑ Ko-Seto with a type of iron glaze that makes reddish brown spots on the black background.

As a part of Seto ware, Akazu ware belongs to one of the Six Ancient Kilns of Japan and is still produced using age-old production techniques. It is fired in the Akazu area of Seto, which lies in the eastern part of the city. The flavor of this part of town contrasts with that of the large-scale ceramics factories in the center. The characteristic features of Akatsu ware are that it uses each of the 7 glazes from Heian times—ash, iron, Ko-Seto, Shino, Oribe, Abukei, and Kizeto—together with the 12 decorative techniques, which include kezurime (burring), nunome (texturing), herame (spatula marking), and sukashibori (openwork). Akazu is blessed with high-quality kaolin, and here, even now, ceramicists throw on a wheel, carefully producing their works piece by piece.

Take a stroll across bridges decorated with Oribe or Shino ware

Seto’s highlight is the bridges that span the Setogawa River that runs east–west through the center of town. As befits a ceramics town, Seto has six bridges along the Setogawa River that are decorated with ceramics. Each of these is worth a look. The Minamibashi Bridge has ceramic panels made from Oribe ware, while the Miyamaebashi Bridge features porcelain panels painted in cobalt oxide. Other bridges include the Miyawakibashi Bridge, which is decorated with panels showing each of the animals of the Chinese zodiac, and the Higashibashi Bridge, which has flowers created from Nezumi Shino ware. Every spot you choose to walk around Seto is full of atmosphere. You will find contemporary objects and a wall / walls decorated in a geometrical arrangement with implements used in ceramics. Both sides of the river are lined with shops selling Seto-mono, old and new, and the city also has many museums devoted to Seto ware.

Museum of History and Folklore

The Pioneer of Seto Ware Festival