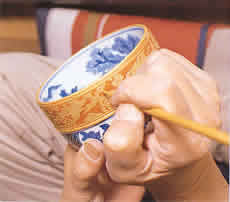 Kyoto served as the capital of Japan for 1000 years. As befits an ancient capital with a rich history, Kyoto still boasts a vast number of traditions and crafts that are very much alive. An individual style of pottery came to be cultivated in the midst of this enviable environment and culture, giving birth to many notable ceramic artists who have gone down in history. The pottery that was created in Kyoto, was clearly distinct from other Japanese ceramics styles such as those with a very local flavor, rooted in the character of a particular land; or styles that were produced for use as fancy gifts in official clan kilns. With Kyoto’s craft traditions and the high-level aesthetic sensibility of the city as its foundation, Kyoto ware was also bold in adopting designs from other kilns, thus giving birth to brilliant ceramic works. The profound workmanship of Kyoto, which cultivates new traditions, is the same now as it was in the past. 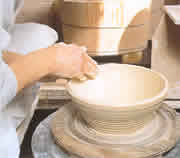 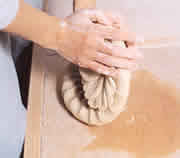 The great achievement of two masters: Ninsei and Kenzan

With the rise of the tea ceremony during the Momoyama period (1582-1615),
raku ware tea bowls that were the taste of tea master Sen no Rikyu came to be produced. Until this time, no pottery deserved of the name had been produced in Kyoto. The raku ware of this period is not included in what is now known as Kyoto-Kiyomizu ware. What is generally referred to as Kyoto-Kiyomizu ware nowadays is the works that were made by the Tamba-born potter Nonomura Ninsei during the early years of the Edo (1603-1868) period. The gorgeous and luxurious color overpainted earthenware pieces that were the unique style of Ninsei impacted on the pottery world of Kyoto, and the entirety of the city’s production went over to colorful overglaze pieces in a variety of forms. Later, Ogata Kenzan, together with his brother Korin, further developed Ninsei’s style. These works, which were produced during the early- to mid-Edo period, are referred to as ko-Kiyomizu (old Kiyomizu ware). The fact that the two masters Ninsei and Kenzan were first to succeed in escaping from an imitation of Chinese and Korean styles and producing a pure Japanese style attests to their greatness. This can also be considered the major source of today’s Kyoto?Kiyomizu ware. The impact of these artists extended beyond Kyoto-Kiyomizu ware, to styles such as Seto and Mino ware, and their techniques are still being carried on to this day. Kyoto-Kiyomizu was stimulated by the high-level artistic qualities of maki-e lacquerware, calligraphy, painting, and dyed textile design that made up the cultural life of the capital. The creative spirit of the makers of Kyoto?Kiyomizu ware, who adopted such cultural input in a flexible way, resulting in underglaze painting and colored glazes unseeing in any other production center, is still alive and well to this very day. 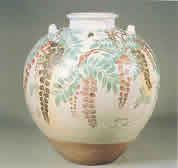 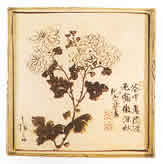 ↑ Various designs created by skilfully hand-painting traditional patterns on a shiny white porcelain base. A distinctive characteristic of Kyoto ware is its free style of underglaze painting created magnificently through the use of a multi-colored palette of red, blue, yellow, gold, and silver. The works of Ninsei (left) and Kenzan (right) who created a permanent name for Kyoto ware.

New traditions that continue to be born, even today

Kyoto has no soil that is suitable for making clay. Top-quality soils from other regions were carefully mixed to create the particular surface texture of Kyoto-Kiyomozu wares, which are rich in variety. Also, Kyoto-Kiyomizu ware is descendent from Ninsei’s potter’s wheel, which was considered the absolute best. Kyoto-Kiyomizu ware is light to hold and feels lovely against the lips, qualities which are born from the exquisite craftsmanship involved in pulling up the clay in a single, light movement, without the slightest aberration. The particular refined taste of Kyoto ware came into being as it learned from traditional crafts and the designs of other kilns. In addition, starting in the Meiji period (1868?1912) and continuing until this very day, Kyoto ware has also adopted Europe’s scientific, industrial production methods as it continues the tradition of hand-made, hand-painted works, thus earning itself a high reputation internationally as well as in Japan.

The birth of Kyoto-Kiyomizu porcelain from a hobby

While Kenzan, who was responsible for the popularization of Kyoto-Kiyomizu ware, sourced his raw materials from Imari, he did not actually produce works in porcelain. The first artist to do so with Kyoto-Kiyomizu ware was Okuda Eisen. Eisen, who was the owner of a large pawn shop, entrusted most of the family business to his shop staff and led the life of a member of the literati, enjoying his elegant hobbies. Eisen’s privileged social position allowed him to devote himself to the production of porcelain pieces in a way that had not been attempted by average potters. The white porcelain bodies produced by Eisen were not on a par with those of Imari or Kutani ware. Nevertheless, his works acted as a turning point. Many followers appeared and Eisen’s achievement can be considered significant in the sense that higher quality ceramic pieces with sometsuke (underglaze blue) and iro-e (overglaze color painting) came to be developed. Later-day Kyoto-Kiyomizu ware is the legacy of these works.

The hometown of Kyoto-Kiyomizu ware

Gojo-zaka is located in the Higashiyama ward of Kyoto. This street, which gently slopes its way up to Kyomizu-dera Temple, is the birthplace of Kyoto?Kiyomizu ware. These days, the street is also full of artists workshops and shops selling ceramic wares. In the old days, the entire area is said to have been full of climbing kilns, with trails of smoke rising into the sky, creating a tranquil scene. The change to electric and gas kilns put an end to such scenes, and modern buildings have filled the street. However, stepping into the back streets, one can still find the atmosphere of the old days, thanks to the old houses with their pantile roofs. The roaring trade of Kyoto-Kiyomizu ware, of course, is just the same now as it was in the olden days. 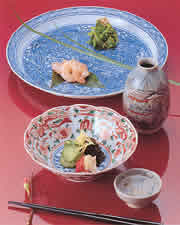 The neighborhood of Gojo-zaka, Higashiyaka, which has been a busy pottery center since olden times, is still a ceramics town full of artist’s studios and pottery dealers. The neighborhood is recommended for those who want to enjoy shopping or try their hand at painting ceramic items or pottery-making in a way that can only be enjoyed with Kyoto-Kiyomizu ware. Provided reservations are made, visitors can enjoy the opportunity to throw pots under the direction of famous artists in their workshops. In addition to this, a range of Kyoto?Kiyomizu works can be found on display in museums, large and small, including The Museum of Kyoto and Kyoto National Museum. These provide detailed explanations of the history and features of Kyoto-Kiyomizu ware. It is a unique Kyoto sight to see travelers, particularly those visiting from overseas, in tourist destinations. It is also a good idea to try eating Kyoto cuisine, once that can be enjoyed with the eyes, to enjoy its spirit of elegance.