Kutani ware, a reflection of the spirit and sentiment of the people of Hokuriku 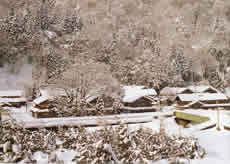 The birthplace of Kutani ware is Kutani, a village along the upper reaches of the Daijojigawa River, which runs through a ravine between the snowy mountains in Yamanaka-machi, Enuma-gun, Ishikawa Prefecture. In these parts, the winter snow can stop the passage of traffic, rendering the village inaccessible. This closed terrain, which is so different to others, is said to have created the particular beauty of Kutani ware. That beauty can be seen in its painstakingly applied illustrations or the sharpness of its powerful lines, as if Kutani’s craftsmen were trying to defy the rough waves of the Sea of Japan or to endure the long, snowbound days and nights. Present-day Kutani ware is deeply imbued with the spirit of Kutani. It is produced in the cities of Kanazawa, Komatsu, and Kaga, but particularly in Nomi, a city that lies approximately 20 kilometers south-west of Kanazawa.

Mystery is part and parcel of the history of Japanese pottery, and Kutani ware is no exception. The generally accepted theory is that sometime around 1655, Maeda Toshiharu, the feudal lord of Daishoji (a subsidiary domain of the Kaga clan) commanded one of his retainers, Goto Saijiro, to set up an exclusive kiln for Daishoji, supported by the financial resources of the Kaga clan and the dazzling culture known as Kaga-hyakumangoku*. This is considered to be the origins of Kutani ware. The third-generation lord of Kaga, Maeda Toshitsune, directed his attention to pottery-making as one of the industries of his domain. He ordered his son, Toshiharu, to establish a kiln in the village of Kutani, where high-quality stone suitable for the production of ceramics had been discovered. Pottery was produced here, albeit only for about 45 years. It is the works of this period that are currently referred to as ko-Kutani (old Kutani ware). For causes unknown, the kiln subsequently fell idle for approximately 100 years. Some time later, the Kaga clan established another kiln in Kasugayama, in the city of Kanazawa. As a result, many kilns sprang up in the desire to revive ko-Kutani ware. Each with its own style, these kilns served to re-boot the history of Kutani ware. This marks the starting point of contemporary Kutani ware.

* Hyakumangoku literally means one million koku of rice. In pre-modern Japan, rice yields were measured in koku, the amount of rice eaten by one person each year.  In particular, koku was used to measure a clan’s financial power, which was determined by the amount of rice a clan could yield. Kaga was one of the wealthiest clans at that time and its power of one million koku of rice gave it great symbolic status. This later became known as Kaga-hyakumangoku, an expression referring to the clan’s wealth and the rich culture that this produced. The term is synonymous with its glorious prosperity.

Ceramic Wall (at the lobby in Komatsu Airport)

Production with full division of labor 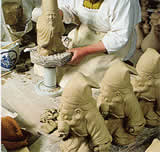 Numerous kilns are scattered throughout the city of Nomi, which accounts for about 70% of the production of Kutani ware. One distinctive feature of Kutani ware is its use of uwa-e (over-painting). Labor is divided distinctly into three components: the work of the kiln, that of the painter who paints a design over the glaze, and that of the wholesaler. While all processes are undergoing mechanization and unification, most Kutani pieces are still hand-produced by craftsmen.

Another characteristic feature of Kutani ware is its dignified color scheme of five colors: green, yellow, red, purple and Prussian blue, which are applied with special tools to create illustrations over the glaze. With its color scheme and uwa-e as distinguishing features, contemporary Kutani ware comes in a wide variety of forms such as tableware, floral organs, stationery trays, and so on.

The aesthetic of Kutani ware’s five color scheme is said to have been introduced by Kusumi Morikage, a master of the Kano school or painting. Using these five colors, distinct painting styles were created for all styles of Kutani ware, from ko-Kutani through revived Kutani. Ko-Kutani (which appeared around 1655) is attractive for its bold, painterly structure and strong, stirring aesthetic. The Mokubei style (1804) features Chinese-inspired illustrations on a red base. Meanwhile, the Yoshidaya style (c. 1820) avoids red completely and has patterns over the entire surface. The Iidaya style (c. 1835) is characterized by detailed figures, with the edges are filled with a pattern known as komon, with gold ornamentation added. The Shoza style (c.1850) uses Western paints to create a gorgeously beautiful visual world and developed into the main style of industrially produced Kutani ware from the Meiji period onwards. The Eiraku style (c.1865) uses gilt decoration techniques borrowed from Kyoto-Kiyomizu ware* to create a red base, over which illustrations are painted in gold only. In such a way, Kutani painting styles changed with the times to become modern-day Kutani ware.

Enjoying everything from ko-Kutani to contemporary works

The Kaga clan, which had the financial resources to the extent of hyakumangoku or one million koku of rice, paid particular attention to the promotion of arts and crafts. In addition to Kutani ware, the city of Kanazawa also gave birth to a large variety of other traditional crafts such as Kaga yuzen, gold leaf, and handicrafts made from paulownia wood. These crafts established what is known as hyakumangoku culture, which is still alive and well in the life of Kanazawa people. Museums and art museums around Nomi City present everything from ko-Kutani to contemporary works, providing the opportunity to enjoy the beauty of Kutani ware to the full.

Offering a rich assortment of goods, from guinomi sake cups for 100 yen to large platters that go for several million yen.