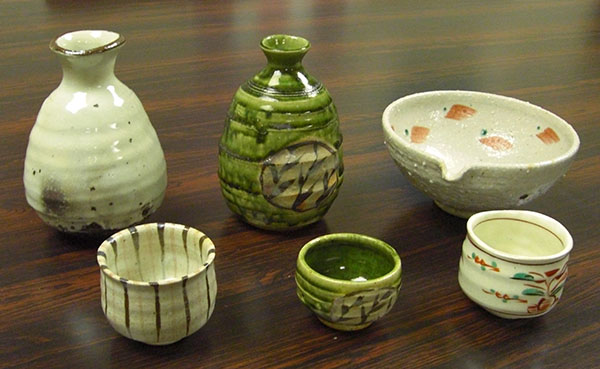 When November comes around, we are finally in the season of delicious freshly brewed sake, which we can enjoy drinking in the slightly chillier autumn air.

In pre-modern times in Japan, October was known as Kannazuki or Kaminashizuki, both of which originate from the practice of brewing sake from the new rice harvest during this month. This is the time when sugidama*, large balls created from fresh, green sprigs of Japanese cedar are hung under the eaves of sake breweries to let customers know that freshly brewed sake is now available.

Tokkuri (sake flasks) and sakazuki (sake cups) serve an important role in the in enjoyment of sake. These days, more and more people are drinking their sake chilled, which means that vessels such as katakuchi (lipped bowls) and guinomi (large sake cups) are also becoming popular. Tokkuri come in all sorts of shapes and types. You will find gourd-shaped tokkuri, or kayoi tokkuri (also known as genzo tokkuri), which are simpler in shape and were used for transporting sake in the past. Then there is the ichi-go tokkuri, which is general use these days. Tokkuri are made from both earthenware and porcelain; they may be painted with beautiful images or covered in a stylish fine pattern known as komon. There are truly so many different designs.

The word “tokkuri” is said to derive from the sound of sake being poured from the vessel, which to the Japanese ear sounds like “tok-tok.” Katakuchi have their origins in choshi, a type of sake vessel with a handle that was used in Japan during the Kamakura period (1185–1333). Choshi with a spout on both sides were known as morokuchi, while those with a spout on only the one side were known as katakuchi. Meanwhile, guinomi are somewhat larger than the average sake cup and can also be put to stylish use to hold condiments or delicacies. In addition to holding sake, tokkuri and katakuchi can also be used as containers for soup stock or dressing or for any number of other purposes. Larger katakuchi are just the right size for serving salad or cooked dishes. Sakazuki are often enjoyed by collecting cups produced in different kilns and regions then showing guests one’s collection and inviting them to select the cup from which they would like to drink.

Drinking hot sake from your style of sakazuki in the cold weather—is there anything that better epitomizes the spirit of a pottery aficionado?