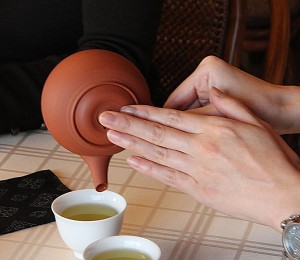 The original tea plant is believed to be a native of the Yunnan–Guizhou Plateau in China, from where it traveled through various lands and historical eras to become the beverage that we know today. The Cantonese word “cha” took an overland route to the West, where it came to be known as “chai.” This word became established in Persian and then made its way on to Europe. In the East, the word traveled across the seas and became the Japanese word “cha.” Meanwhile, the Hokkien version of the word, “teh,” traveled the sea route and became “thé” in French and “tea” in English.

Tea came to be drunk in various ways in different places. Vessels used for both green and black tea were developed using ingenious methods in Japan. There were as many types of tea as there were ways to enjoy this beverage. Ryokucha was steeped in kyusu teapots, gyokuro was enjoyed slowly using yusamashi and small teacups, while hojicha was savored using a slightly thick earthenware teapot known as a “dobin” together with thick teacups.

In Japan, husband and wife teacup sets are a popular gift given at wedding and anniversary celebrations. These teacup sets used to come with a stout version of the cup for the husband and a slightly smaller version of the cup for the wife. These days, however, matching mug cups seem to be the fashion. Incidentally, mug cups appear to have a long history—they were already used in Greece in pre-Christian times.

It is said that black tea became fashionable in England, where it developed into the style of beverage with which we are familiar today. Whether it was “elevenses,” “afternoon tea,” or “high tea,” the way of referring to tea varied with the time of day one was enjoying the drink. Each of these gave birth to associated manners and drinking styles. Afternoon tea is particularly well known. For afternoon tea, finger sandwiches, scones, and small pastries are served on three-tiered stands, and tea is poured from a large, elegant teapot.

In any case, it seems that no matter which part of the world they were living in, tea-lovers were rather particular about their tea vessels.