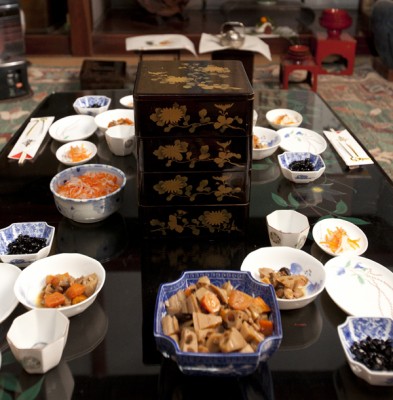 The news that Japan’s food culture has been inscribed on UNESCO’s Representative List of the Intangible Cultural Heritage of Humanity caused quite a stir throughout Japan this year. An important component of Japan’s food culture is the concept of omotenashi—hospitality, or the wholehearted entertainment of guests.

The original idea of omotenashi has its roots in the hospitality that was offered to the gods. The Japanese offered omotenashi to various gods, be they gods of nature or ancestral spirits, by offering their plentiful catches and harvests and asking for their lives to be protected in return. Produce from the land and the sea
that was offered to the gods was later eaten—villagers and others who had gathered together cooked up these food items and consumed them in the consciousness of eating together with the gods. Particular vessels and customs were associated with such omotenashi. Over the course of time, these refashioned themselves into the form in which they appear in our lives today.

The first element of omotenashi is functionality. Size, utility, and diversity in tableware are important. The second element is that of ritual. Tableware is either everyday or exceptional. In other words, we separate our tableware into pieces that are used on an everyday basis and those that are for special occasions. The third element is story-quality. This refers to items of tableware with patterns that carry meaning or items that have been nurtured within the history of the family. The mood of the seasons, special events, the stories associated with tableware used by family members—all these things help nurture the spirit of hospitality.

Stories may be associated with particular plates or bowls. For example, there will be a story to the bowl that grandma used to use, a serving plate that you bought at the time of your wedding, or a small plate that you found while on holiday somewhere. A wealth of memories and happiness is hidden among the many pieces of tableware that we own. It is the act of telling these stories, or our guests trying to interpret these stories—it is this interplay and this thoughtfulness that we can properly call the spirit of omotenashi.

Another year is coming to an end. As I clean my home in preparation for the New Year, I find myself talking about old memories as I hold a bowl that’s full of nostalgic sentiment, or thinking about new plates that I’d like to use for New Year. Here I am at the end of the year, suddenly aware of the profound role that tableware play in our lives.