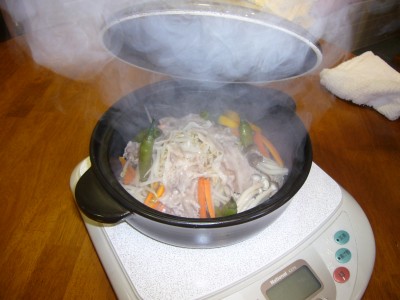 When the cold winter season arrives, we come to see slightly thicker Shigaraki-, Oribe-, and Shino-yaki, more so than fine porcelain tableware.

A little closer to home are donabe (clay pots) and tonsui (lit. “drink water”), which could be considered standard winter tableware items. It is said that if you want to avoid having cracks or leaks in a new donabe, you should first fill it with rice bran and water that has been used to wash rice. Bring the mixture to the boil, and your new donabe is ready to use. Hot pot dishes full of ingredients are prepared in different variations in each region of Japan. This is a truly delicious and fun style of cooking. Tonsui are the small bowls with handle-like protrusions that are used for serving hot pot dishes. They can also be used to hold tempura dipping sauce. There are two explanations for the origin of the word “tonsui.” One is that it comes from the shape of nuts that were cracked in half and used for drinking water, as was done in Japan in ancient times. The other is that “tonsui” is a corruption of “tanshi,” which was a type of vessel introduced to Japan from China. In either case, tonsui seem to have been used to eat soup-like dishes.

With earthenware, we see many folk-craft works. Good examples would be Mashiko-yaki and Onta-yaki. Taking a look at earthenware in the West, we find slipware, which is used in the UK for dishes like stews. Europe’s aristocrats used to hunt for game around their villas. They often used this kind of tableware to enjoy their game dishes as they gazed at the fire in the hearth.

Whether in the West or the East, I suspect that using earthenware as we warm ourselves up around a fire is possibly the best combination of things we can enjoy.